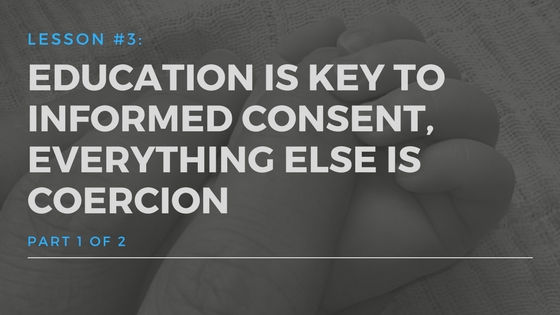 When our third child was born, I was not prepared. I was 41 weeks, and I still feel guilty for how ill-prepared I was the morning after his birth. No, I’m not talking about the car seats we installed, crib we dusted off, clothes we dug in boxes to find… I’m talking his birth vaccines. My midwife and I had spoken extensively about my wishes, and she agreed. I didn’t birth with her or that facility. I will say my obstetrician was excellent, and my nurses were incredible (minus one or two), but the pediatrician was out of line.

I declined the Hep B vaccine. She came in three or four times saying he needed it and it was safe. I said no each time. During her last intrusion, she said she spoke to her supervisors and was going to make some calls. I told her to do what she had to do; he wasn’t getting the vaccine. She didn’t come back. Were they going to inoculate him against my will?! They can’t do that. That’s a direct violation of human rights. Were they going to take him and seize custody?! I’ve heard rumors of this… I won’t let them! I asked my nurse to grab the vaccine insert from the vaccine lot; she brought it to me quickly. Boom. Proof. The adverse events were clearly written.

I was exhausted. I had already been up around 30 hours, in which time I had a baby! My husband had gone home earlier to relieve our friend who was with our other two, but now I was panicked. Stress, exhaustion, and panic were a recipe for disaster. I called him. He said he would come and bring my laptop. I hurried to pull my files. I couldn’t access my desktop, so I went to the databases to grab articles. I couldn’t find my 1000 peer-reviewed studies file anywhere. Why was the internet SO SLOW?! I didn’t even have Word on this laptop. It was a mess. I had compiled some files, but it wasn’t organized.

It was 5 pm now; I was still copying files from databases. My nurse walks in, nervous. CPS and the police were in the unit, and she didn’t know what was happening. I was NOT giving them my baby, that’s what was happening. My husband arrives. An officer walks in with a CPS official to issue me an affidavit from the district attorney that the pediatrician was going to press criminal charges should harm come to my newborn. I asked the officer “Who would be responsible if harm came to him from the vaccine?” He said he “assume[d] whoever made the vaccine.” I laughed at that one and told him the doctor is free of liability, and so is the maker of the vaccine. The 1986 National Childhood Vaccine Injury Act frees the manufacturer AND doctor from all liability should a child be harmed. Instead, they put into place a vaccine court for compensation. If your claim is approved, you sue the government. Your case is managed by government-appointed lawyers and heard by government judges. Awkward. Don’t take my word for it. Google it.

Anyhow, the officer handed me this paper that I promptly read and placed on the table. I told them they were giving us no options. He said “Nobody is going to force you to do anything today. I just have to issue this to you.” They left. I likely wasted his time, oops. I don’t think they realized the gravity of the situation. Nobody does. I went to the state CPS website to see how they got involved and noted that it is considered “medical neglect” to withhold vaccines in our state. WHAT. I was shocked.

The next morning a new nurse comes in and asks what has been going on and hears me out. She voiced her acknowledgment and seemed to agree with me. She returns later to ask if my other children were seen anywhere in the community. I asked her why it was important, and she said, “I’m not completely sure, but it sounds like the pediatrician is digging into your other kids’ files and trying to prove medical neglect.” I was floored.

When did parental duties to raise children and care for their general health fall upon doctors? When did the work of parents need to be approved by doctors at routine “well child” visits? Have parents lost all ability to raise healthy children without help from the medical industry?

I have always felt that routine appointments, with no concerns, were a waste of time and resources. Doctors should be spending their time caring for at-risk and at-need children. They should additionally promote wellness in populations that are not the picture of health. I do not want to monopolize the time of a physician to show them a healthy child. First of all, my kids don’t need to go to a location of sick children so they can pick up mutated viruses and resistant bacteria. They do enough of that at playgrounds and grocery stores. Secondly, it is a literal waste of time, and I always leave feeling like I gained nothing. Third, healthcare is not mandatory. It is available for your use, should you need the services. Yes, first-time parents should use their resources and visit the doctor with their concerns and alleviate worry about their child’s development for their age. If you have concerns, see a doctor! Totally appropriate. Seeing a doctor with no complaints? Odd. But, maybe that’s me…

Part two to follow in the next few days.