I hesitate to continue to share my experiences, but the truth will set me free… Right?!

When I had my second child, I was already wary of vaccinating because of my firstborn’s reaction. I didn’t understand how something we deem outright “safe” in the medical world would have any downsides. Every single medication I’ve administered comes with risks. I tell my patients the side effects and let them make those choices. Informed consent. My mind thought vaccines didn’t have any side effects… or at least I never looked into it. My pediatrician never talked to me about risks, nor did any nurse who had injected my first child. But WHY?! Isn’t that our job?? We weigh risks and benefits. How are parents not subject to knowing the risks for their children?

I was tormented the months following my second child’s birth. This was cognitive dissonance. I decided that the “combo vaccine” (Pediarix) was too much of a risk to benefit my infant. I would further limit his schedule to DTaP alone. I was most worried about pertussis. Have you seen the videos of those tiny airways struggling for air when a baby has pertussis? It’s frightening.

I searched for a highly-rated pediatrician for his two-month shots. It was an hour drive, but they had great reviews. That day was surprising. We showed up and I declined everything but the DTaP injection. The pediatrician was NOT HAPPY. He was actually pretty pissed off. He wasn’t sad or concerned; he was irate. I didn’t really care about his opinion after he raised his voice and told me my baby “needed them” and he didn’t “understand why A NURSE wouldn’t consent for BASIC medical care.” Uhh… okay. Was that supposed to offend me into consent? All it did was foster more questions.

He definitely didn’t want to understand my reasons. I get it. Medical people are BUSY. They are also pressured by protocols. I do not have time to look up and memorize every risk factor for the medications I administer on an emergent basis. But those are EMERGENT. Those risks are higher than most medication risks, including death or disability. Have you seen drug commercials? Yikes. I worked in a practice that frequently prescribed antibiotics; I knew the indications and risks like the back of my hand. We also gave the same medications over and over. It is easier to educate on treatments and medications you are used to providing, or is it? When I send a patient out with a prescription now, I will give them the indication (and mechanism of action when asked) and advise them to LOOK UP THE RISKS, but common ones included [list of 3-4 symptoms] and maybe how to combat those effects. It is up to them. It’s the patient’s decision to take medications or administer them to their children. We are partners in their health, not dictators. We don’t own their bodies; we simply provide the options. So why was this different with infant vaccine schedules? They are not mandatory (lest we travel back to Hitler era medical practice and war atrocities) they are *recommended* by the CDC.

I went home and did some research and stumbled upon vaccine manufacturer websites and I finally READ THE LABELS of vaccines… They are called “inserts.” No, these are NOT the flyers that are readily available at your doctor’s office. Those pamphlets are basically advertisements; I had a stack from the appointment. I read those flyers and compared them to the manufacturer inserts. Thoughtful omission. I read about DTaP and I was sick with what I had found about pertussis. We still don’t know enough about pertussis to know how to protect from it, and THERE IS NO SEROLOGICAL CORRELATE FOR THE PROTECTION FROM PERTUSSIS. This means that we don’t know how to measure our immunity to pertussis… so, we are giving a medication to do what exactly? We have no idea. What’s more is that it states SIDS can be EXPECTED after a pertussis-containing vaccine. They don’t say it can be expected after diphtheria or tetanus vaccine; they say specifically “pertussis-containing.” This is due to a study that found “more incidence of SIDS” in a small population. They’re calling it a “chance.” That being said, they call these risks rare. Some even say 1 in 100,000… big number (the number is much smaller according to the small study in the insert, see screenshot, you can pull it up yourself direct from the manufacturer’s website, link provided). Maybe it is unlikely, but if my child was that 1… that 1 is my everything. Those risks don’t outweigh the benefits of doing next to nothing. Sorry, not sorry. 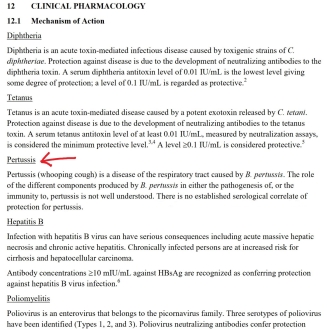 Correlation doesn’t equal causation with reactions (SIDS), according to the insert. But, somehow, correlation absolutely equals causation when it has to do with the decline of disease during vaccine introduction only. Except for the fact that vaccinated kids today are the largest population of children with confirmed Pertussis. The CDC monitors communicable diseases (See the bottom chart about vaccine status in the screenshot below. They merely OMIT the vaccinated population, but I did the math. Link provided below screenshot).

There are a whole slew of factors aside from vaccines including sanitation, clean drinking water, epidemiological studies on infectious disease processes, living quarters/quarantine, and readily available medications for acute conditions that destroyed childhood illnesses… but that’s none of our business. Sure, maybe vaccination helped at one point and to a degree (to the detriment of some adults and children), but there is so much more to this story as you will soon see… I wish it were simple and clear. I wish the greater good existed despite monetary drives. I wish you health and wellness without bias.